The congregation of Christ Church Lutheran was founded by a group of German immigrants in 1911. When they decided to build a new building in 1949, they rejected the Gothic style design popular at the time and turned instead to simpler Scandinavian designs.

They chose Finnish born architect Eliel Saarinen, the son of a Lutheran pastor, to build them an 'honest' church. This humble church became almost a hobby for him. It turned out to be his last work, completed just six months before his death. His 'honest' use of light, brick, stone and concrete created a space of stunning simplicity, tranquility and spirituality. 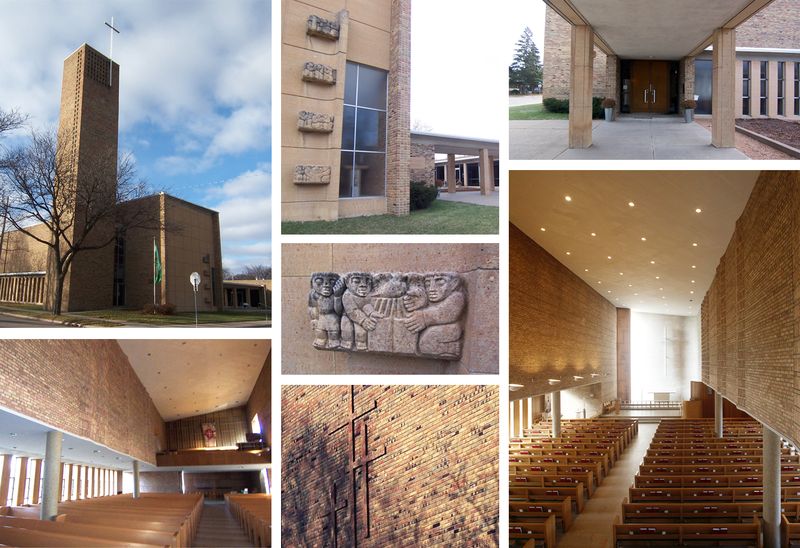 A first impression upon entering the sanctuary is one of striking simplicity… yet its spiritual quality hints that the design is far from simplistic. It is asymmetrical, and upon closer examination you find that no two surfaces are parallel.

The cross is ethereally lit by southern windows extending from floor to ceiling but not visible from most of the sanctuary… opposite a curved wall… extending to an undulating brick upper wall… slanted ceiling… and so it continues throughout the sanctuary.

There are no parallel surfaces in the church, and sound-absorbent surfaces are placed across from sound-reflective surfaces. As a result, in addition to being an inspiring physical space its acoustics are probably among the finest of religious buildings in the country.

When the congregation of Christ Church Lutheran decided to add an education wing in 1962 they turned to Eliel's famous son, Eero Saarinen. Known for his exuberant designs, including the St. Louis Gateway Arch, he created a wonderful homage to his father's masterpiece. The joined pair of buildings stand today as a rare example of the father's and son's works combined.

Wondering what kind of homes are available in this neighborhood? Check out Longfellow homes for sale.