Schools will be closed again tomorrow for dangerously low temperatures for the fourth time this month. As I passed through the Crystal Court of the IDS Center in downtown Minneapolis last week and watched people relaxing under the black olive trees and walking the skyways in shirtsleeves, I had renewed appreciation for this 'Epicenter' of Minneapolis that is oblivious to the weather be it hot or cold. 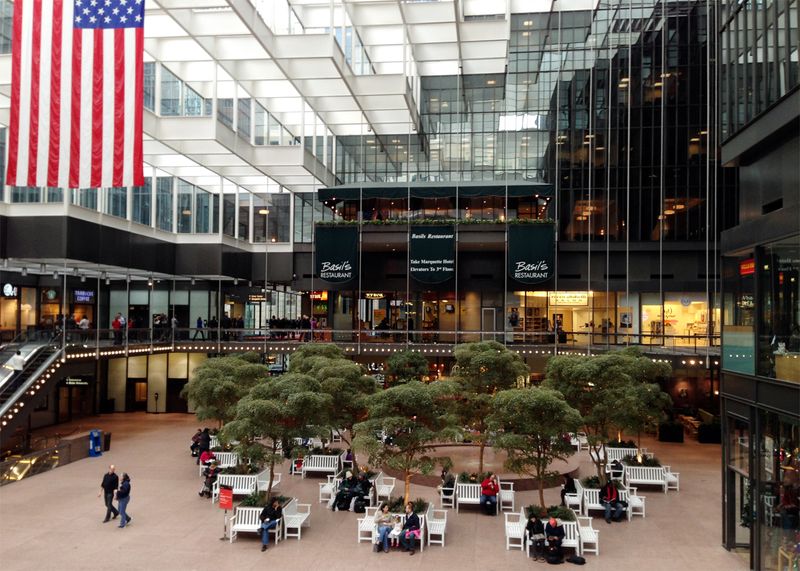 When Philip Johnson designed the IDS center he used San Marco plaza in Venice as his inspiration for the 8-story Crystal Court. He envisioned a piazza that functioned as a town square… a space not only for gathering and relaxing, but even more importantly for pedestrian circulation on both street and skyway levels.

Skyways were the brain child of local businessman Leslie Park in response to the opening of Southdale in 1956, the first enclosed shopping mall in the country. He knew that downtown was in trouble and responded by building the first skyway in 1962.

By 1972, when the IDS Center was completed, seven skyways were in use but they weren't connected yet. IDS was the first major downtown development that had skyways integrated into its design, connecting on all 4 sides and providing the link to connect the other skyways.

But it is the way he accomplished these connections that helps make the design so iconic. None of the four entrances are symmetrical to each other. And while the street level plan is rectangular, the second level traffic flow is at oblique angles, creating more interesting and more open views.  And of course the glass walls and dimensional ceiling create a sense of light and openness in the whole space, with the main street entrance feeling a connection to Nicollet Mall and the upper level having views of both the piazza and the streets.

Today Minneapolis is known as having the biggest skyway system in the world, connecting 69 city blocks…  greatly appreciated on days like tomorrow when we are predicted to have -45 degree wind chills.