One huge change that came with the new Minnesota State Plumbing Code that went into effect on January 23rd of this year was the requirement for annual backflow preventer testing. Here's the exact code language for this new requirement, which can be found under section 603.4.2:

603.4.2 Testing. The premise owner or responsible person shall have the backflow prevention assembly tested by a certified backflow assembly tester at the time of installation, repair, or relocation and not less than on an annual schedule thereafter, or more often where required by the Authority Having Jurisdiction. The periodic testing shall be performed in accordance with the procedures referenced in Table 1401.1 by a tester qualified in accordance with those standards.

To make it simple, homeowners with testable backflow devices are supposed to have them tested by a certified tester annually. The most common testable backflow device found at Minnesota homes is a pressure vacuum breaker, which is a device that is found on nearly every residential lawn irrigation system (aka sprinkler system), shown below.

Sometimes this device can be found mounted high up on the side of houses because it must be located at least 12" above the highest sprinkler head.

At the time that I initially blogged about some of the upcoming plumbing code changes, I wasn't sure exactly what this particular change was going to be all about, so I only touched on it briefly. I didn't completely believe that such a costly and labor-intensive change would be coming, but the Minnesota Department of Labor and Industry has put together a fact sheet  http://www.dli.mn.gov/ccld/PDF/fs_backflow.pdf making it clear that this is really what's required. These devices need to be tested annually by a certified tester.

How are municipalities enforcing this new requirement? I don't know, and it seems that most municipalities don't either. This requirement is still too new for everyone to know exactly how it's going to be enforced. It sounds like municipalities are going to start keeping track of all new installations, and will start sending out reminder letters to homeowners who don't comply. If you already have an existing installation, you probably won't be required to do anything about it.

Side note: while pressure vacuum breakers are the most common devices used for sprinkler systems, they not the only devices allowed. A reduced pressure zone (RPZ) backflow prevention assembly is also allowed, and can actually be installed in the basement instead of at the outside of the house 12" above the higher sprinkler head. This never happens on residential installations, however, because RPZs need to be tested annually… but now that new PVB installations need to be tested annually too, it seems that an RPZ might be a more atractive option. Another reason to use an RPZ is that they no longer need to be re-built every four years, which the old code had required. 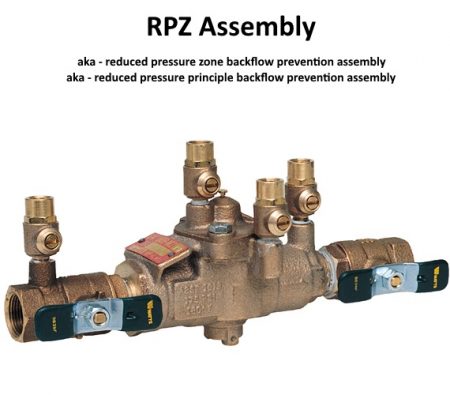 The other common place that a homeowner might have a testable backflow prevention device is on the water supply piping to a steam or hot water boiler.  The Minnesota State Plumbing Code used to require a dual check valve with an intermediate atmospheric vent as the lowest level of allowable protection for the water supply line to a boiler. These devices were commonly called "9D" valves, but the new plumbing code doesn't mention this type of device at all; per section 603.5.10, boilers must be protected by either a testable double check valve backflow prevention assembly, or an RPZ valve (pictured above). Despite this, the city of Minneapolis is allowing the old non-testable dual check valves on 1 and 2 family residential buildings, and I heard a rumor that this section of the MN state plumbing code might get amended to no longer require testable backflow preventers. See the Minneapolis memo on backflow preventers for boilers.

If you're having a new lawn irrigation system installed, you'll need to have the backflow valve tested every year going forward. If you already have an existing system, this won't affect you unless you have the valve replaced. This new requirement probably won't affect homeowners who have boilers.