As we drove down Lyndale Avenue in South Minneapolis a few weeks ago we noticed a new restaurant/pub on the corner of 40th, not far from Lake Harriet. We decided to stop and were not disappointed. A woman we chatted with said she lives in the neighborhood and it had been packed ever since it opened… only two days before! 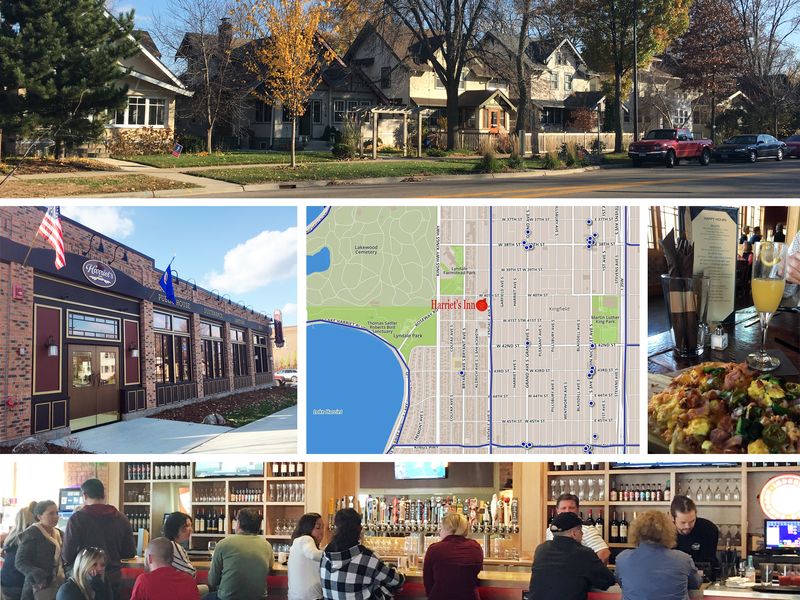 Lyndale marks the border between East Harriet and King Field neighborhoods, known for quiet tree-lined streets with stately and charming houses built largely 1900-1935… and for great access to the city lakes and neighborhood bistros/coffee shops/bakeries.

Nicollet is officially known as Eat Street further north, but the restaurants and coffee shops continue in this neighborhood as well. Harriet's Inn will be a nice addition to this Lyndale corner. I had a breakfast flatbread, which was delicious with a great kick.  It was busy, but the turnaround was pretty good, staff was very friendly and helpful.

Walkscore considers this location very bikeable… easy access to downtown and lakes and fun places to hang out. But because it is largely residential it is considered only somewhat walkable. Of course, that depends on what you want to be able to walk to… Lake Harriet is close!

Be sure to also check out Common Roots Cafe that Angela talked about last week at 26th and Lyndale… often overshadowed by nearby French Meadow Bakery and Cafe.

Previous PostMay I Toot My Horn for a moment?Next PostRepairing a window with fogged glass
0Shares