While the majority of our moisture testing is done on stucco homes, moisture testing isn't just for homes with stucco siding.  Moisture intrusion can happen with any type of siding, and it's always an expensive repair when left unchecked.  Just recently, some friends of mine expressed concern about some dirt that started showing up below the corner of their living room window, so they asked me to take a look.  The photo below shows the "dirt" they were talking about; click on the image to see a larger version. 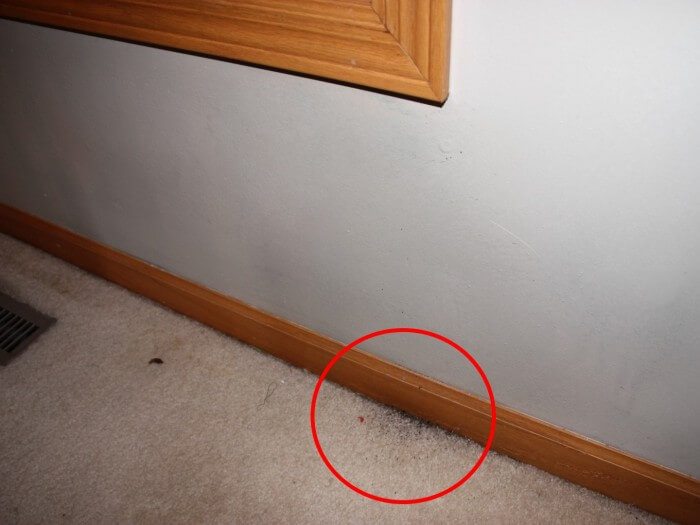 Can you guess what caused it?

The title of this blog post probably gives it away, but before I show photos of the rotted wall, let me first explain all of the stuff that went wrong.  To start, here's a photo of the front of the house.  It's a little tough to see through the tree, but there are no gutters at the upper section of the roof, and the valley at the upper roof dumps water onto the lower roof.  From there, the lower roof is supposed to direct water into the gutter. 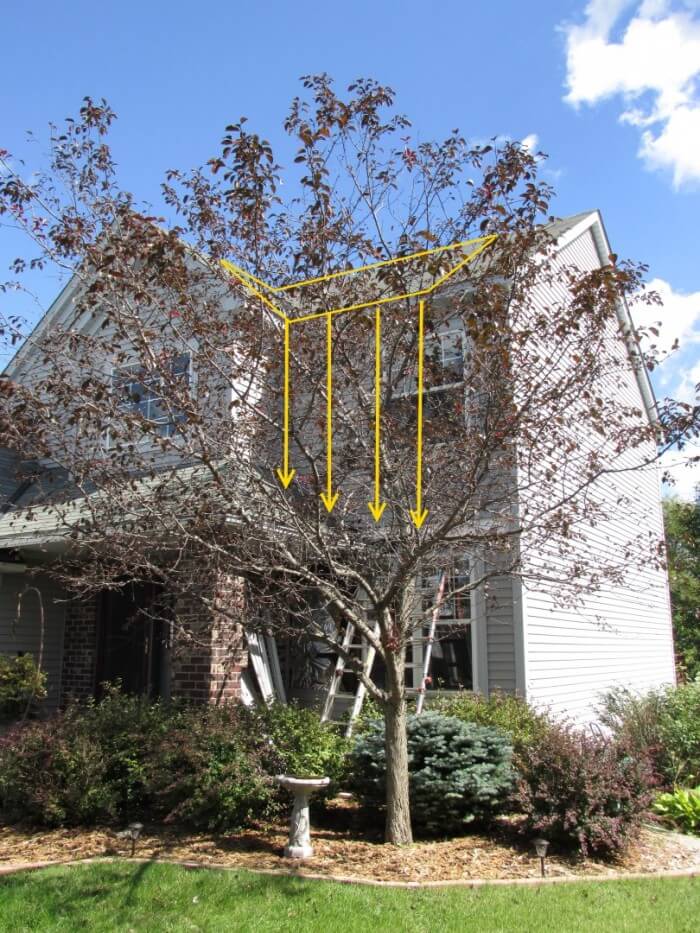 If there had been gutters installed at the upper portion of the roof, all of that water would have been dealt with, but instead the lower roof gets pounded.

At the lower portion of the roof, there should have been a piece of kick-out flashing installed where the roof ends above the window, but there was none present.  This allowed water that ran down the roof/wall intersection to leak in behind the vinyl siding.

I did some moisture testing around the window to confirm my suspicions, then we took the siding off to get a good look at the damage. 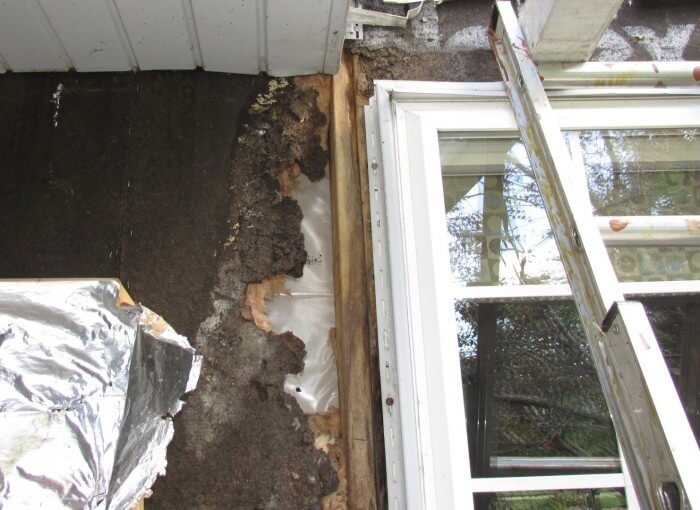 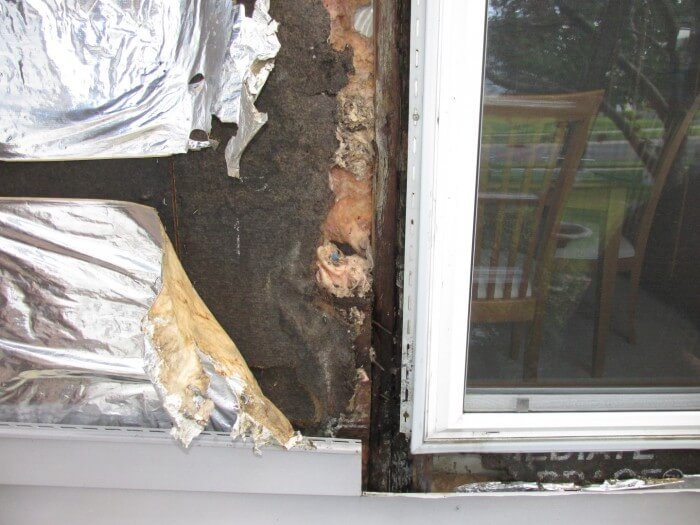 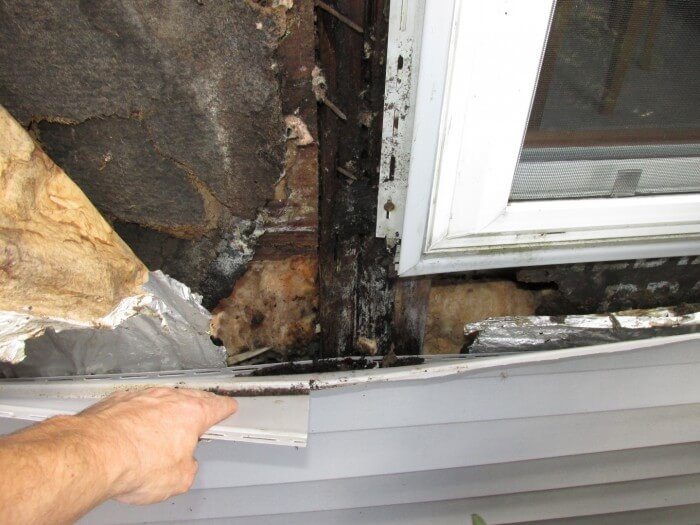 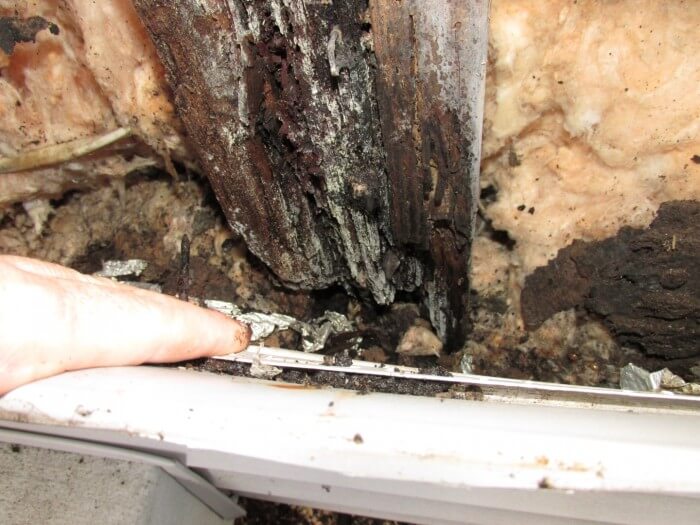 Nasty, huh?  Thankfully it was just vinyl siding, which does a pretty good job of allowing the wall to dry out. If this had been stucco siding, the damage likely would have been much more extensive and the repairs much more expensive.

Remember, the only visible evidence of this water damage was the little black flecks that had made their way through the window and landed on the carpet.  I suspect those were little pieces of rotted wall sheathing blowing into the home during periods of heavy wind, but I'm not 100% sure.

This is the type of damage that home buyers try to avoid when buying any home, and this is why some home buyers choose to have moisture testing performed on homes with vinyl siding.  Vinyl does a great job of hiding this kind of damage.  While moisture testing on stucco homes is considered an invasive inspection and requires special permission from the homeowner, moisture testing of vinyl sided homes is done by using a non-invasive surface scanner to quickly scan large areas of the siding for moisture intrusion, and then followed up with pin-probe testing behind the siding to verify the results of the surface scanner.  The siding is then popped back into place, leaving the siding in it's original condition.  This is a non-invasive inspection that requires no special permission from the homeowner.

Included below is a short video clip showing Antonio and I performing moisture testing on a 2007 built townhome that had moisture intrusion below the deck.

If you're buying a home with vinyl siding or you already own a home with vinyl siding and there is concern about water intrusion, have moisture testing performed.  Vinyl sided homes with no moisture barrier should always raise concerns, but as seen in the video clip above, moisture intrusion can still occur when a moisture barrier is present.  For information about how moisture testing is done on other types of siding, click here: http://www.structuretech1.com/moisture-testing/other-types-of-siding/ 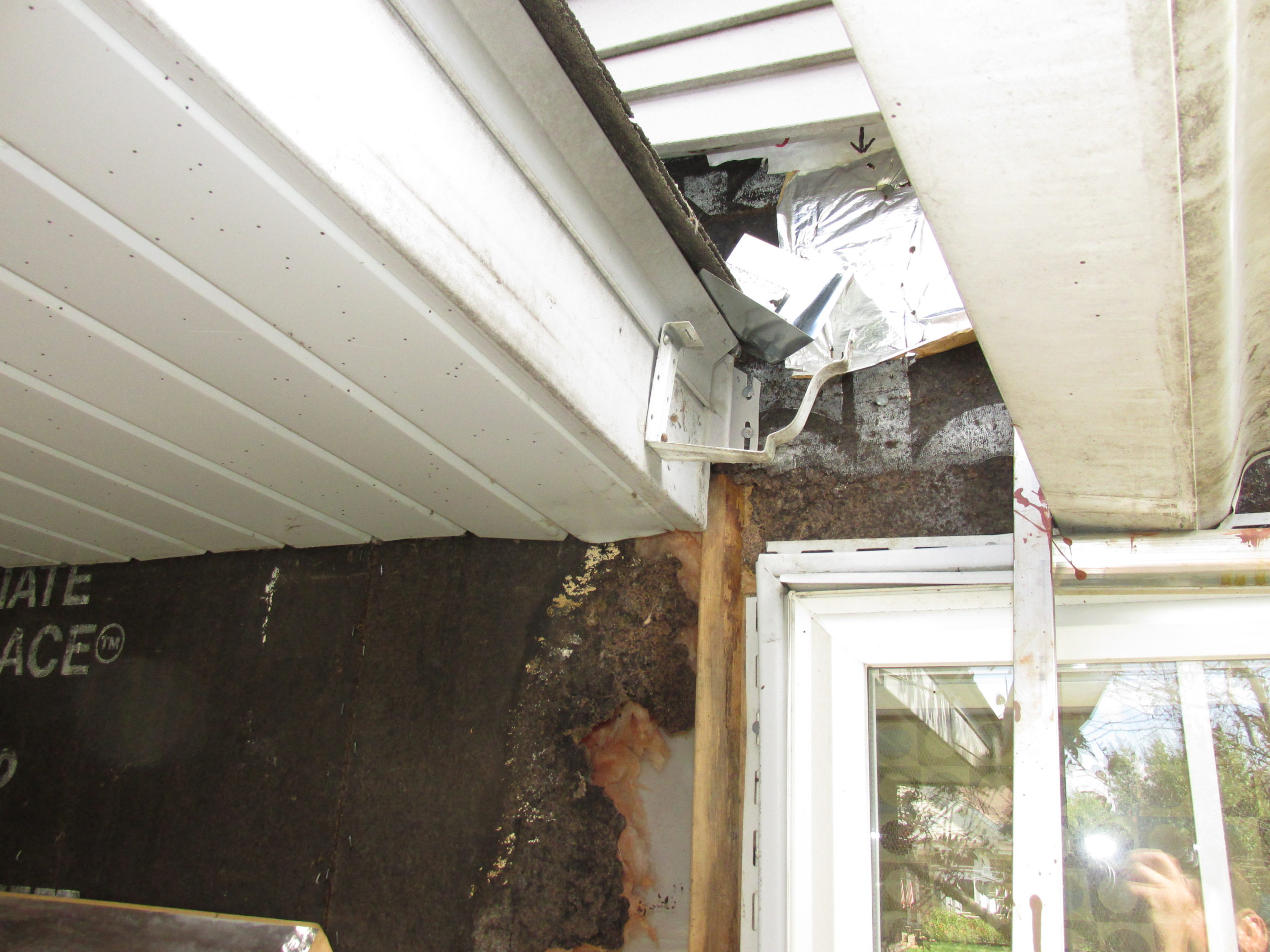 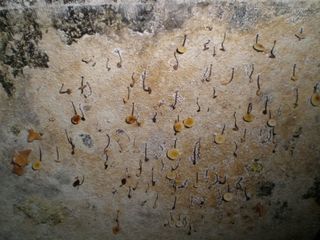 My knee-jerk reaction to mold testing is "don't bother". The situations where mold testing may have some value are few and far between.