The blackboard behind the eat-in bar in St. Paul's Merriam Park Neighborhood Cafe proudly states that City Pages voted them 'Best Pancakes' for 2014. When serendipity brought us to the neighborhood today we decided to check out this small cafe that has garnered many accolades. 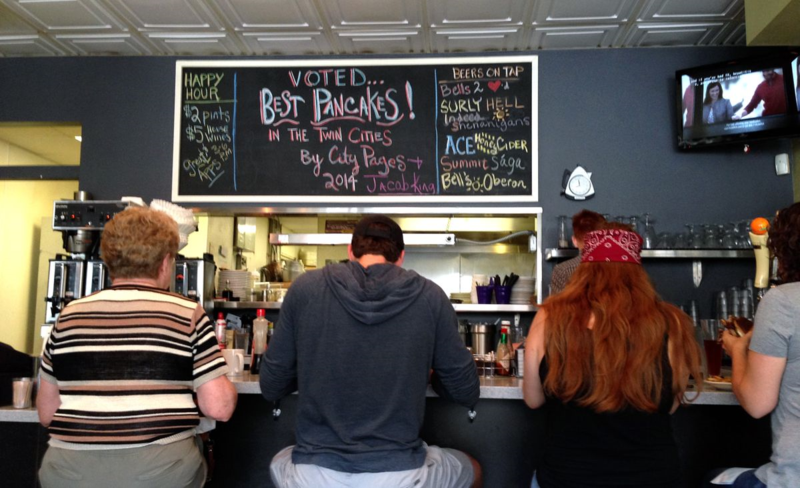 I couldn't resist ordering their special of the day, 'The Pope Benedict', but my husband had to try the pancakes. Both were winners… some of the best pancakes John has ever had, and mine was awesome! We love crispy hashbrowns, and these were cooked to perfection. I never order orange juice unless it is fresh squeezed… and this mimosa was fantastic.

The Merriam Park neighborhood is about equi-distant to both downtown St. Paul and downtown Minneapolis… in fact, the site of its Town & Country Country Golf Club (one of the oldest in the nation) was once considered for the site of the State Capitol and St. Paul Cathedral because of its central location.

The small Neighborhood Cafe is located right behind O'Gara's. We have driven by the corner of Snelling and Selby many times… noticing Patina and Starbucks on the western corners and O'Gara's on the east… never knowing this small treasure was even there tucked behind O'Gara's. Stop by if you are in the neighborhood… you won't regret it!

Merriam Park is a neighborhood that was developed in the late 1800's and early 1900's, with streets lined with large, stately 2-story homes. Elegant Summit Avenue is at its southern boundary, which also claims  Macalaster College and parts of St. Thomas University.

Think this could be a neighborhood where you might want to live? Check out homes for sale in Merriam Park. This neighborhood gets high walk scores and has many wonderful places to eat, including The Blue Door Pub, Izzy's Ice Cream and Trotter's Cafe.

As a young adult from “small city” North Dakota, Minneapolis/St Paul was a fascinating, exotic place. My wife and I often explored the fascinations of the “Cities”, like landmarks, parkways...

We visited Cossetta’s on 7th Street last week. As I considered how to introduce the topic of Cossetta’s, I thought of “unique”, “individual”, “distinctive”, all of which work, but I...