This is the first in a series of periodic posts walking neighborhoods, Connecting: Point A to Point B… with Point B often being a neighborhood place to eat!

We belong to Birdsong Community Supported Soup Club and pick up our pint of fresh, chef-created soup every week in the southeast corner of St. Louis Park near Miracle Mile Shopping Center at Highway 100 and Excelsior Boulevard. Edina cuts into this part of The Park, and Morningside is a bordering Edina neighborhood. 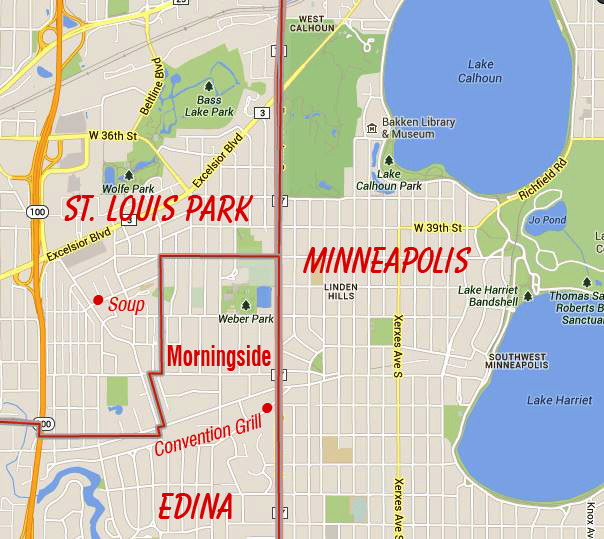 After picking up our Birdsong soup last Friday, we decided to park the car near our soup pickup spot and walk to the Convention Grill in the Morningside neighborhood.

Established in 1934, Convention Grill has long been a neighborhood gathering spot and a destination for generations. In fact, when our daughter heard we had been there Friday night, she said they had almost stopped there as well that night… a great place to go when you are craving a great burger and awesome crispy, fresh cut fries!

Our trek to Convention Grill brought us through a diverse, yet communal area of houses… beautiful homes in a clean and quiet no-thouroughfare residential area.  The houses were very different from one another yet fit well as a community.  As odd as it sounds, I could feel the character of the neighborhood as we walked through it.  Our leisurely meander was completely enjoyable.  Some streets had no outlets, some curved through gentle hills.

It became evident as we walked that this has been an area of significant recent redevelopment. In fact, like neighboring SW Minneapolis Edina has been experiencing an unprecedented increase in the number of homes being torn down and rebuilt… especially in the older Morningside neighborhood. We passed concrete evidence… a FOR SALE sign in front of a home that was being sold by a developer specifically as a tear down for new construction.

The Morningside neighborhood has a wonderful history. Oddly, the community grew up as a place between here and there.  At the turn of the century the Como-Harriet Streetcar line was built to go between the Linden Hills area of south Minneapolis and the town of Edina.  Homes were then built along the line to form this unique village.  The town was platted in 1905. 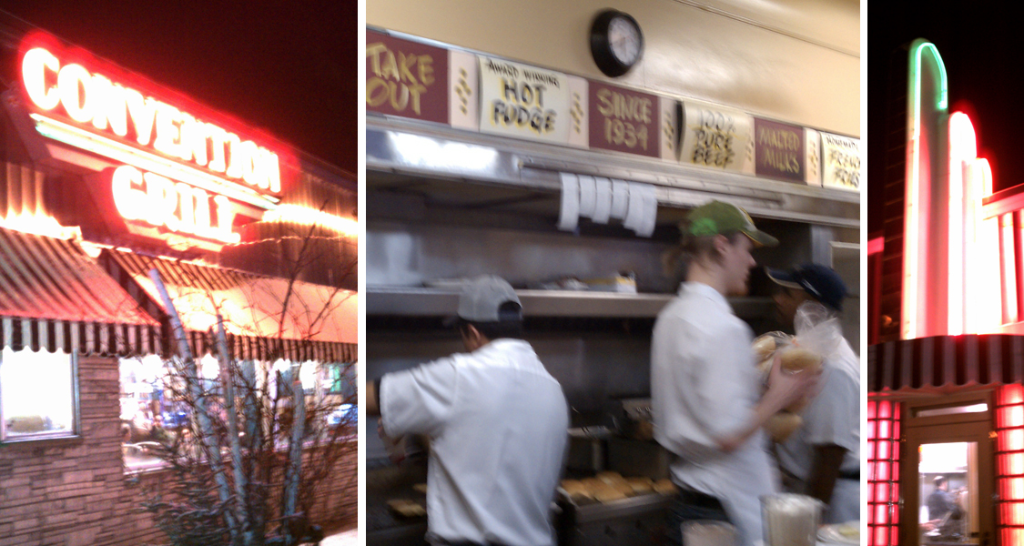 Edina's Convention Grill, near the corner of France Avenue and Sunnyside Road next to Minneapolis' Linden Hills neighborhood, is an old-fashioned family diner. It has a short menu of mostly delicious, artery-clogging burgers, skin-on...